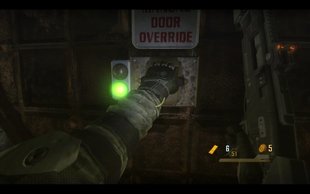 In F.E.A.R. 2: Reborn you're a Replica soldier going by the call sign Foxtrot813.

After a classic F.E.A.R. cutscene, featuring Paxton Fettel, you're dropped right into the action with an Elite Powered Armor suit. Your mission? Exterminate all Armacham forces.

Smashing through walls in an enormous skyscraper, as fighter jets soar by and helicopters open fire on you is a treat. The EPAs offered some of the more enjoyable fights in F.E.A.R. 2, but those scenes pale in comparison to what's on offer in Reborn. Vehicles explode as you riddle them with bullets, lifts and wooden constructions slide down as your heavy armored suit steps on them, crates drop from cranes as you shoot at them and tons of Armacham soldiers explode, get crushed, and die.

Of course, eventually you're forced to abandon your EPA and move ahead on foot. Fortunately, the following sequences are no less impressive.

If anything, Reborn is an indication that Monolith knows how to make a varied shooter. One moment you're duking it out with helicopters inside an EPA, the next you're hopping down desks, chairs and glass plates in a crumbling skyscraper. And before you know it, you're facing off with mutated horrors in underground tunnels, closing off spawning chambers, raging through the streets of Auburn, and so on...

Reborn also temporarily teams you up with a few fellow Replica soldiers. You run into them occasionally and get to fight together, which makes it all feel a bit like Half Life: Opposing Force (other side of the conflict, more teambased fights). Well, that is until Paxton steps in anyway...

When Paxton steps in, Reborn suddenly transforms from a fun shooter, to a full-blown parallel storyline. Parallel to F.E.A.R. 2 that is, and while the exact time frame is a mystery, it certainly takes place towards the latter half of F.E.A.R. 2.

Foxtrot813 is not just any Replica soldier and his warped mission will culminate in a truly marvelous ending scene that no true F.E.A.R. fan would want to miss. Unfortunately it also comes packed with those annoying ghost soldiers that plagued F.E.A.R. 2?s ending... and there is still no saving in this DLC.

And that is something many F.E.A.R. 2 players will like about this DLC, but some might not: the difficulty level has increased. Now I still had no real problems in Hard mode, but there were definitely a few tough scenes involving snipers, heavy armors and ghostly appearances.

Interestingly, Reborn feels like it puts you at a greater numerical disadvantage than F.E.A.R. 2 did. A bit odd for a campaign involving a Replica soldier, but it allows for some intense action scenes.

Towards the end of this, fairly decently sized, DLC pack you start running into more of F.E.A.R.'s paranormal side. Alma occasionally drops in and Paxton is a constant companion, but apart from a few flashes, nothing genuinely fearful happens. That was a bit disappointing.

Yes, the gore is still there; mutants still roam around; ghosts are ever present; even mutilated bodies are in. But it never felt quite as creepy as F.E.A.R. 2 did, which might put the more horror-oriented F.E.A.R. fan off. 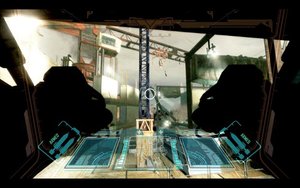 The final level looked like it may have remedied that, but then Reborn ended.

Which brings me to another flaw: it's not very long.

Now I got a little over 2 hours out of this DLC pack, in Hard mode. That's actually quite a lot for 7,99 euro, when realizing that most modern full-price games only offer 6 hours of singleplayer gameplay.

The problem lies in that it's fun, so by the time Reborn ends you'll be wanting to play a few hours more. It offer surprisingly high quality content, that's right up there with the original campaign, which makes it a shame when the campaign ends so early.

One last topic I need to cover is the achievements. Monolith has added a few more for Reborn, which are still useless (not tracked by Steam or Games for Windows Live). It's a shame really, because some of them are quite ingenious: take down a power armor in under 30 seconds, avoid all heavy armors in the maze, survive the first level without using the EPA, etc...

I've definitely enjoyed my short stint with F.E.A.R. 2: Reborn. I've yet to play another DLC pack that offers this level of quality, albeit for only five short mission arcs.

It would be nice to see more of these things churned out by Monolith, but I'd prefer they release F.E.A.R. 3 next. Reborn's conclusion definitely made it more difficult to wait for the next installment in the F.E.A.R. franchise.

Of course if you've never liked F.E.A.R. 2: Project Origin (read my review here), then you'll find nothing better here. It's more of the same, but in a very good way.