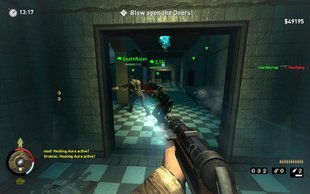 These game modes are objective-based, which means one team will be defending and the other will be trying to accomplish objectives (e.g.: stealing documents, blowing up walls, etc.). The difference between the two is that in Stopwatch mode, each team switches to the other side after a round ends, so it has each team trying to beat one-another's time. This Stopwatch game mode would be my favourite, as a formerly hardcore Return to Castle Wolfenstein and Wolfenstein: Enemy Territory clan player.

The horrible server browser was the first thing that caught my attention. You can filter the list of servers, but cannot exclude empty servers (only full servers). And when you sort by ping, it sorts alphabetically rather than numerically, which means servers with 120 ping will be shown before servers with 24 ping. This makes searching for appropriate servers cumbersome, but sorting by playercount generally does provide some good servers to play on. However, the statistics are a bit slow, so a game will frequently be full even when the server browser shows 3-4 slots open.

Most of the time I just opted for the quickmatch option, which should drop you in an active game with good ping. I say should, because it will sometimes drop you in an empty server, or try to place you in a full server - in which case you're better off just opting for the server browser, because quickmatch will often keep recommending the same two or three servers.

You'll need to select a side and class when you join a game. Rather than choosing between allies and axis, now you'll be faced with the choice of joining the German resistance or the axis. This clearly limits the number of weapons available, because only German weaponry can be selected. This means allied weapons like the Thompson and Garand are out.

A few new weapons are introduced, such as satchel charges for Soldiers and rifles for every class, but the arsenal still feels limited even with these new additions. Perhaps most noticeable is the exclusion of some fan-favourite weaponry, such as the Venom Gun (RtCW), Mobile MG (W:ET) and even the knife. Raven Software has tried to make this limited arsenal more varied by introducing purchasable upgrades, but for most class-and-weapon combinations there are obvious 'best choices' that everyone uses.

Speaking of classes, there are only three now, with the Field Ops' role being overtaken by the Engineer. The Engineer is still your vital objective-oriented class, who can construct machine-gun nests, cover and bridges on certain maps. He can also distribute ammo now and comes packed with more stock ammo than the other classes. As such, the Engineer benefits most from weapon-damage improvements for his MP40, rather than larger ammo cartridges.

The Medic can drop medic packs for players (and himself) or opt to use area heals in the veil mode, which isn't as imbalanced as it sounds. He can also revive fallen teammates instantly with a veil trinket that replaces the syringe. As in the previous games, the Medic comes with very limited ammo, which means he benefits most from ammo clip upgrades.

The Soldier is still your basic infantry guy who can use special weapons (a flamethrower, a Panzer and an MP43), but it slowed down by the heavier implements. Now the Soldier also has the ability to drop satchel charges, which can wreak havoc on approaching enemies, but are easily dispatched with a few shots of an alert player.

I like the new Engineer, but removing the Fields Ops does remove a certain element of strategy from play. The Soldier was never the most popular class for clan matches and is like to be largely overlooked (except on very rare occassions) in this game as well. This means teams will now largely consist of just two classes, rather than three, which translates to less variety in strategies. Not a good thing for competitive players.

Each class has roughly 12 upgrades to unlock, which all need to be bought with gold. This gold is earned when you perform well in multiplayer matches, which ensures that Wolf veterans will have an easier time gathering upgrades. Well, they would, if the ranking and unlocking features actually worked as intended, but more on that later.

Strangely the included veil powers and unlockables work very well. Skilled players will easily unlock upgrades, but these upgrades will not push them too far out of reach of the ordinary crowd. Okay, so it's not a good thing for competitive play in any form, but with the pricing of upgrades and the way gold is awarded, most capable players should have it all unlocked in a day or so.

The veil makes everything turn green and a little darker, and this ensures that combat is actually a little bit more difficult in veil mode. You won't be able to see your opponents as easily as you normally would. In addition, veil mode makes you glow green as well, which makes you a very obvious target. This ensures that you'll want to use your powers carefully and balances it out with the game's other elements very nicely.

As the unlockables and veil powers have proven to be of little real consequence, most Wolf players would rejoice. These were the main items that the community, and I, were worried about. This makes it all the more sad that the regular gameplay presented in Wolfenstein is just not up to snuff. The class-based objective oriented play definitely feels like a Wolfenstein game should, albeit a little ligher with the removal of the Field Ops and many weapons, but the same cannot be said for the combat, the movement and the interface. 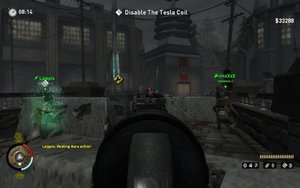 Wolfenstein's gunfights feel a lot like Call of Duty: World at War. You can sprint, but you cannot fire while sprinting. The game features ironsights which dramatically improve your aim, and the overall pacing has been toned down significantly. But worst of all is that the accuracy of guns has been decreased, and the skilled moving gunfights of RtCW (or even W:ET) are nowhere to be found.

Essentially, combat now comes down to strafing a bit, ducking and standing every now and then, while keeping ironsights on and tapping out bullets. It has lost the arcade - and hardcore - feel that was present in previous Wolfenstein multiplayer games, in favour of a more mass-market, standard, bullet spraying model.

Perhaps even worse than all of this is the removal of sprintjumping/strafejumping. Even Quake Wars still featured this to an extent, but in Wolfenstein it is impossible. And even if it were possible, then it'd be useless, because you'd be an easy target with the much slower pacing of the game.

The interface is very similar to that of the most recent Call of Duty games, with your basic kill, award and objective alerts all displayed in exactly the same manner. There's nothing wrong with that, but the lack of a voice command menu is a serious gripe. No more calling for medpacks or ammo via a simple numbered voice command menu. Instead, characters occasionally state the need of their own accord, and you'll see icons on players lacking ammo (as an Engineer), or requiring reviving (as a Medic).

Voice chat has been introduced, likely as an alternative to voice commands, but no one uses this feature. The lack of such a menu may sound like a trivial thing, but the difference is immediately noticeable in public play. Most medics entirely ignore players on low health, and hardly any engineer will give ammo to anyone at all. It's a very Call of Duty / Free For All like game on publics now.

Similarly lacking are server controls. There is no way to vote for other maps, shuffling teams, etc. This can be a real problem in stacked matches, where a simple shuffle would suffice to balance things out. And it gets better yet, because the extensive after-game statistics screens that graced previous games in the franchise have disappeared. You cannot even see your overall accuracy, let alone your accuracy per weapon, nor can you see battle-specific statistics such as battlesense gained.

Wolfenstein multiplayer is also riddled with bugs. Apart from the server browser and quickmatch problems mentioned earlier, the ranking and unlocking systems both malfunction 100% of the time as well. Most player see their ranks and unlocks disappear, even between map switches. My experience was even more incredible, because my fresh account somehow started out at level 20, with mostly everything unlocked. I've been randomly gaining and losing levels ever since, playing as rank 18 one map, gaining a level, and suddenly ranking in at 24 the next map.

Also interesting is the 'team is full bug', when joining 16+ player servers. You'll join a server that is not full, but when you then try to join a team, you can't. I've experienced two crashes, one of which was likely due to Steam, not Wolfenstein. I've been randomly kicked by Punkbuster. And those buggy unlockables are just so darn annoying.

One of the key elements of both Return to Castle Wolfenstein and Wolfenstein: Enemy Territory was the exceptional map design. Any RtCW player will remember Base, Beach, Assault and Village. Any W:ET player will remember Radar, Goldrush and Oasis. Wolfenstein doesn't feature any of these kinds of memorable maps, but there are two maps (one of them you can see below) that are definitely fun to play on and should make good maps for competition.

Overall map design is solid, but not very memorable, much like Enemy Territory: Quake Wars. Map layouts in general are good, but most miss that special factor, which seems to be a common trend in multiplayer shooters nowadays. Some maps are also too heavily geared in favour of one side, which is often the defending (always Axis) side; the map where the resistance has to load rounds into a tank and blow their way into a bank comes to mind (yup, Goldrush-lite).

Generally nothing too horrible, but nothing outstanding either. It's a definite notch-up on World at War, but it just doesn't compare favourable at all with its predecessors.

Wolfenstein multiplayer is oddly notable for its lacking graphics. The singleplayer campaign already doesn't rank amongst the best lookers, but the multiplayer game just takes it a few notches further down, even with all options set to high and turned on. That's not say it looks bad, it looks about on-par with Call of Duty: World at War really, but its a very odd discrepancy between the single- and multiplayer games.

Overall, I'd say Wolfenstein multiplayer has been enjoyable. I'm certain that I'll be playing it for some time to come, but this is more due to the lack of alternatives and its marginally better than Call of Duty gameplay, than due to Wolfenstein's own qualities.

I'm sorry to say that I don't see a competitive community forming around this, even with WolfPro on the horizon. It's just not good enough of a game and most Wolf veterans who will give it a try, will soon return to Wolfenstein: Enemy Territory. Meanwhile any ordinary player that stumbles across this game's multiplayer component is like to prefer World at War's superior finish and more accessible gameplay.

A disappointment and a definite miss for Raven Software, but not nearly as bad as it could have been. Wolfenstein is a decent multiplayer shooter that is in need of some bug fixes and might even gain some traction in the community, but will never be one of the greats of the genre.